A long asked for API feature, the ability to pragmatically collect the PSTN call records and charges from Microsoft Teams, e.g. the phone bill. Up until now, you have only been able to get this by exporting it from the Teams Admin Center into Excel, but now, in beta, you can collect these records from Microsoft Graph.

It forms part of the call records API. The Microsoft docs for the API call: callRecord: getPstnCalls

You can expect to see lots of call reporting/bill generation products to use this API to collect this information for billing. Many large organisations cross charge their telephony costs by country or department.

This is something Modality Systems (who I work for) have been doing for some time in a somewhat bespoke way for large enterprises by automating the export of the the excel report from the Teams Admin Center (basically making automated website calls) into SQL then into Power BI. Still, the API will provide a much more robust and supportable method to export the data from Microsoft.

APIs under /beta in Microsoft Graph are subject to change. Use of these APIs in production applications is not supported, but hopefully, this will come out of beta too. I will update the blog when it is out of beta.

This will cover any PSTN call scenarios

Lee Ford at Symity was very fast in producing a PowerShell script to collect the call records from the API. You can check out his work here. Thanks Lee! 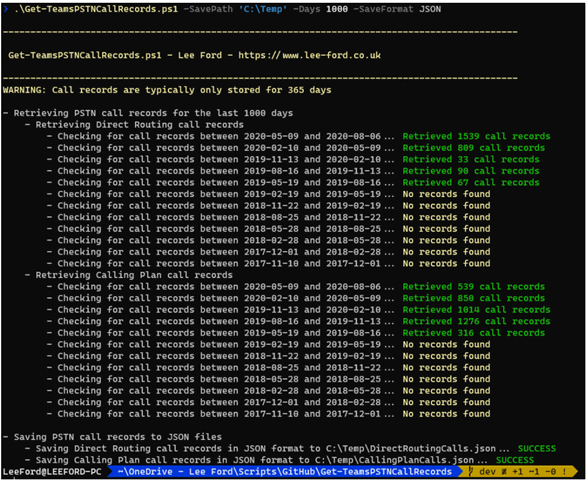 The API will give you the following for each record: