Thanks to Lyndon-Jon Martin, Lead Workspace Field SE at Citrix,  for highlighting this to me on LinkedIn.  Fernando Klurfan, Principal Product Manager Citrix wrote a blog giving an update on Citrix’s support strategy for Microsoft Teams.

Today, you can run Teams in a VDI environment, but you basically have to turn all the Audio/Video features off and just use it for text and files. Microsoft has a Run Microsoft Teams in a virtual environment that essentially tells you how to turn off all the calling, video calling, screen sharing, app sharing, co-authoring features.

The Microsoft native plugin fell away, leaving the only real option for SfB server and online being Citrix. The Citrix plugin supports audio-video and telephony features when the Skype for Business client is hosted on Citrix XenApp or XenDesktop.

Citrix plan to continue to support RTOP for “many years”, and are still actively developing new features (like AMD GPU Acceleration for Linux endpoints, which we released in June, and the upcoming RTME for Chromebooks). Citrix also plans to support the new Skype for Business Server 2019 coming out in the fall in a future RTOP release (source).

SIP is all handed through Skype for Business, and media leverage Citrix’s multi-OS HDX RealTime Media Engine (RTME). RTME is currently available for Windows, Mac and Linux x86 devices, with equivalent functionality. The RTME provides a functional equivalent to the Skype for Business media stack, supporting all calling/conferencing scenarios, such as audio and video calling, hold, transfer, call forking and redirection, and active speaker conferencing. It supports up to 720p30 transmit and receive resolutions. And it is, of course, compatible with the Skype for Business protocols for networking, media encryption (SRTP/AES), firewall traversal (STUN/TURN/ICE) and bandwidth management. Audio and video are encapsulated through the HDX tunnel. 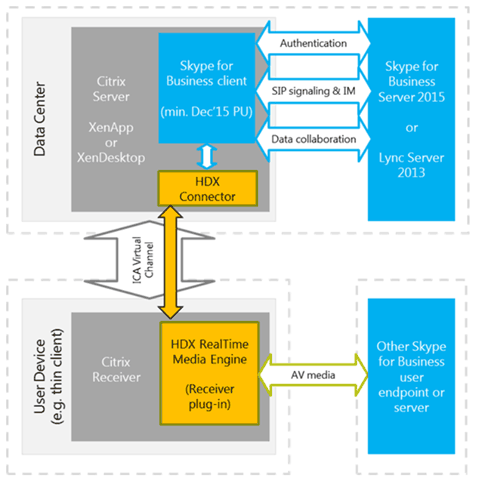 Citrix is working on a similar plugin to support the Teams desktop app. There are no published timelines yet. It’s unclear if this will support Electron and the Progressive Web App, or just Electron. 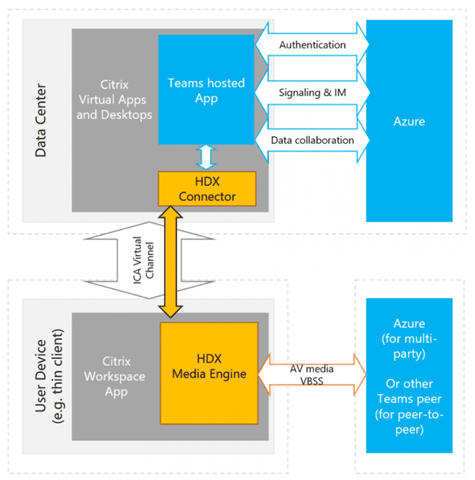 The blog post says the solution will be very similar to what Citrix do with SfB. A VDA-side HDX component will interface with the Teams hosted app and receive commands, then it will open a control virtual channel to a Citrix Workspace app-side media engine and let the multimedia be rendered locally by the endpoint. Reverse seamless will snap-in the local Citrix Workspace App window back into the hosted Teams app.

Authentication and signalling will happen natively on the Teams-hosted app, just like the other Teams services (e.g. chat or collaboration). They will not be affected by the audio/video redirection.

As always, client-fetch/client-render and server-fetch/client-render (in case your endpoints don’t have internet access, thanks to a media relay virtual channel) are going to be available. And of course, there will be support for HID Devices and any endpoint (Windows, Mac and Linux).

What about the Microsoft Teams Web App on VDI?

Microsoft Teams also support Audio, Video and desktop sharing in the web app using WebRTC for multimedia (so it does not require browser plug-ins in Chrome/Edge).

Citrix intends to support this too, with its Browser Content Redirection (BCR) feature. It redirects an entire website to the endpoint for local rendering. Citrix is targeting this feature for  Q3 2018 release of XenApp and XenDesktop, enhancing BCR so it can support WebRTC redirection.

Check out the full original blog from Citrix here: https://www.citrix.com/blogs/2018/07/20/citrix-and-microsoft-are-teaming-up-for-teams/