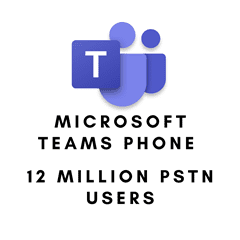 First off we were given the number of Microsoft Teams Phone PSTN users. “Teams Phone is the market leader in cloud calling across VoIP and PSTN. We now have over 12 million PSTN users, nearly double the number a year ago.”, earnings call transcript here.

This is a significant number as previously we’ve been given the number “80 million monthly active Teams Phone users”, but this number included both VoIP and PSTN usage, so not just “Teams Phone” if you define Teams Phone as being PSTN. The logic here being you can make a VoIP call in Teams without the “Teams Phone” licence and PSTN connectivity.

I’m pleased to see a clear number presented for users using Teams Phone with PSTN, and it is impressive to see the momentum of it almost doubling in a year. Judging by what I see with customers and in the market, I expect that momentum to continue.

We know that there are 270 million monthly active Teams users, though that number includes commercial and consumer users. Another number to consider it to is the approximately 345 Million Paid Seats of Office 365.

Over FY22, E5 seats increased more than 60 percent year over year. E5 now accounts for 12% of the Office 365 commercial installed base. The E5 licence includes rights to use Teams Phone (but not the PSTN connectivity or phone number, that is an extra cost).

Based on 12% of the total paid seats being E5, that is somewhere around 41 million E5 users (estimate). We know from Inspire that Microsoft is focused on activating more of those E5 users to use Teams Phone, mainly through their customer success and partner motions.

Based on my work with different organisations I know that not all of them are doing a 1:1 replacement of their existing PBX with softphone/Teams Phone users. With the increasing use of Meetings and VoIP, some are questioning the need for everyone to have a classic “PSTN Phone” service. So it’s not a good assumption to make that all E5 users will be Teams Phone users. There are other security and compliance factors that drive people to E5 beyond Teams Phone. Microsoft is also driving for their larger based of E3 customers to add Teams Phone as an add-on.

Microsoft called out at Inspire that analyists predict Cloud calling (the whole market) will overtake on-premises calling by 2026. So if you look at both the existing licenced base and the market potential, there is still a lot of opportunity for growth in Teams Phone.

Another impressive stat is given. “More than 60 percent of the Fortune 500 have chosen Teams Rooms to connect employees across the hybrid workplace”. We also know from previous announcements that Teams Rooms devices more than doubled year over year.

Again from Inspire, we know this is a big focus area for Microsoft in FY23

Another big focus area for Microsoft is increasing the use of apps in Teams. Third-party and line of business apps that had active usage increased by more than 40% YoY.

To stay up to date with all the Microsoft Teams news be sure to check out my monthly free video updates, as well as lots of Teams training and advice content over at Empowering.Cloud