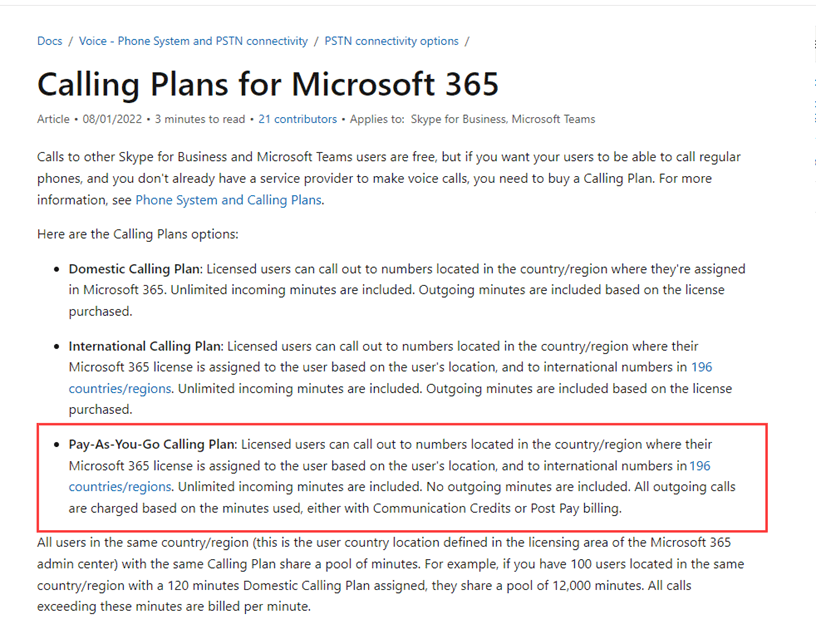 From the Microsoft Documentation:

Communications credits are Microsoft’s name for a pre-loaded “wallet” of money available to use against per-minute telephony costs. Communications credits can be set to auto re-charge, i.e. keep topping up automatically. Having Post Pay billing is a new type of billing for Microsoft PSTN that I don’t think we have seen before.

Previous to this Microsoft only offered Domestic and International calling plans that included an allocation of minutes per user, so a number and bundle of minutes. These bundles were combined for all users on the same plan type, in the same country, into a total pot all those users could use. When the group of users went beyond that bucket of minutes, they would then pay per minute. The smallest user plan you could get was 120 minutes per user per month. This is way beyond what most users use on average. In the US, the standard Domestic calling plan is $8.00 per user per month, and the standard Domestic and International calling plan is $24 per user per month. You could also buy a domestic plan and pay for international calls on a pay-per-minute basis through communication credits.

In addition to the outbound minutes cost on a PAYG basis, there will be a per user per month cost:

The product names and SKUs are:

PAYG licenses aren’t currently available for sale in the United States and Puerto Rico, but they can be provisioned to US and Puerto Rico users if bought in other countries. This is due to the complexities of US tax and consumption billing I believe. So if your tenant billing address in US, you can’t buy PAYG calling plans for any country.

What are the Microsoft Pay-As-You-Go PSTN Calling Plan rates?

Microsoft shares their per minute charging costs publicly here, towards the bottom of the page. You can download the full list.

I’m not clear on that yet; I have asked. Microsoft does now have a mechanism to allow pay-as-you-go telco via Cloud Solution Provider (CSPs). This was introduced initially to deal with the fact that when customers bought calling plans if they wanted to run over their allocated minutes, they would need communication credits, which originally could not be purchased via partners.

Currently, there is no discount or margin for partners on minute overages. I would expect the same for Pay-As-You-Go PSTN calling plans but have not confirmed this yet.

Want to keep up with all the changes to Microsoft Teams Phone?

Be sure to check out my monthly update free at Empowering.Cloud. Everything you need to know each month in under 15-minute videos. We also add videos weekly from subject matter experts from around the world. Our goal is to build a great Microsoft Teams training and advice library and community.

It’s all free, it would be great to see you there.