Microsoft Teams is a constantly evolving cloud product, with many new features being added over time. Microsoft added over 300 features between April 2020 and April 2021.

The Teams web app is updated weekly. Teams desktop client updates are released every two weeks. Client updates usually happen quietly in the background. Not every update brings new features or UI changes, there are constant minor improvements and changes.

New features may be rolled out to a subset or percentage of the total Teams user base, this is not based on a percentage of your tenant, but a percentage of overall users, so you may find some users in your organisation get features or updates before other users.

Some features may be targeted first at specific tenant types, for example, Education tenants get lots of specific Teams features.

The modern approach to apps is to automatically and regularly update them. Auto-updates ensure that users have the latest capabilities, performance enhancements, security, and service reliability.

No, Microsoft Teams updates roll out regularly and organisation administrators cannot control them. There is no channel update model like Office.

The exception is Virtual Desktop Infrastructure (VDI) clients, which do not auto-update and require the administrator to regularly update the VDI image manually.

When will my users get feature X?

Unfortunately, there is no way to know exactly when a feature/update will light up for your specific users. You can review the Office 365 roadmap and Office 365 Message Center for estimates and target dates for rolling out features. 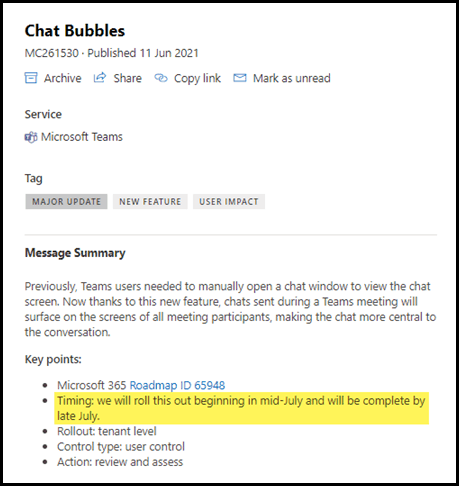 How can I tell if/how many of my users have feature X?

Unfortunately, there is no way to report on how many of your users have X new feature.

Can I disable feature X?

Some features come with administrator control to disable them but most do not. If there is an option to disable the feature you usually be told about it in Office 365 Message Center Updates. Some new features also roll out disabled for users by default, like Webinars.

How can I test and communicate about new Microsoft Teams features before my users get them?

There is a Microsoft Teams Public Preview program that allows you to nominate select users to receive early access to unreleased features in Teams. 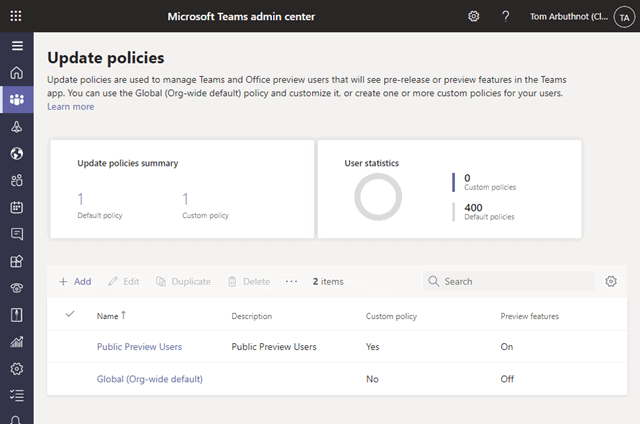 Be sure to subscribe to the blog for my best efforts to keep you updated on what is coming for Microsoft Teams.