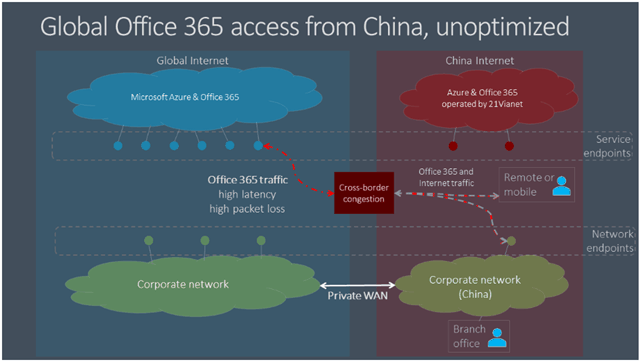 With world events, we’re seeing a big increase in usage of Microsoft Teams in customers around the world, but particularly in China.

China is interesting for cloud connectivity. China ISPs have regulated offshore connections to the global public Internet that go through perimeter devices which are prone to high-levels of cross-border network congestion.

This congestion creates packet loss and latency for all Internet traffic going into and out of China.

For the first time I’ve ever seen, Microsoft is publicly recommending Office 365 customers avoid accessing global Office 365 services from the Internet in China if possible.

For China Offices – leverage the existing organisation private WAN to carry Office 365 network traffic between China office networks and exit the traffic onto the internet outside of China. They recommend egressing in countries like Hong Kong, Japan, and South Korea.

For China end-users – Configure user devices to access the corporate network over a VPN connection to allow Office 365 traffic to transit the corporate network’s private offshore internet connection. Ensure that VPN clients are either not configured to use split tunnelling, or that user devices are configured to ignore split tunnelling for Office 365 traffic.

Microsoft recommends enabling UDP if at all possible.

Note this is not applicable to tenants in the  Office 365 service in China operated by 21Vianet.

You can see the full recommendations here: https://docs.microsoft.com/en-us/office365/enterprise/office-365-networking-china