) are often interested to understand where in the world their Microsoft Teams meeting will be physically hosted, or, to use an older term, where in the world the MCU (Multipoint Control Unit, the thing in conferencing that mixes all the streams together) is located. This is interesting as connectivity can impact conference performance and generally speaking more local can mean a better connection. 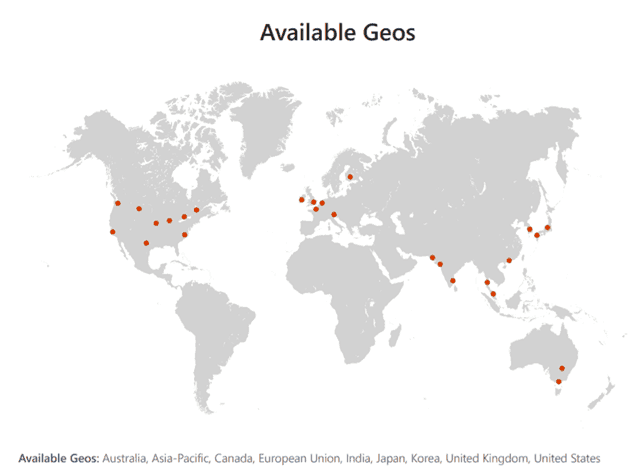 Microsoft Teams is cloud only, so your meetings are on/in Office 365, but physically where? It’s not the same as Skype for Business, your conference won’t necessarily be homed in the same place/region as your Office 365 tenant.

“A Microsoft Teams conference is hosted by Office 365 in the same region where the first participant joined.”

Your Teams conference location is allocated at the time the first joiner joins (not the organiser, but any first joiner) and it is automatically allocated to the conferencing service in the region nearest to that first joiner.

This is better than Skype for Business Online (without Regionally Hosted Meetings, which is nearly all SfB Online). For example, Modality Systems Office 365 tenant is in the US, but I’m in London. So previously if I scheduled a meeting in SfB Online with any number of people all in Europe, our meeting would still be hosted in the US. In reality, this is how I ran for some time and it didn’t seem that impactful, but it is suboptimal. Now with Microsoft Teams, those same meetings are hosted in Europe, even on a US Office 365 tenant.

In what Office 365 regions/data centres are the conference services for Microsoft Teams?

I haven’t found a good public reference for all the possible conference locations, and no doubt it is being continually expanded too. 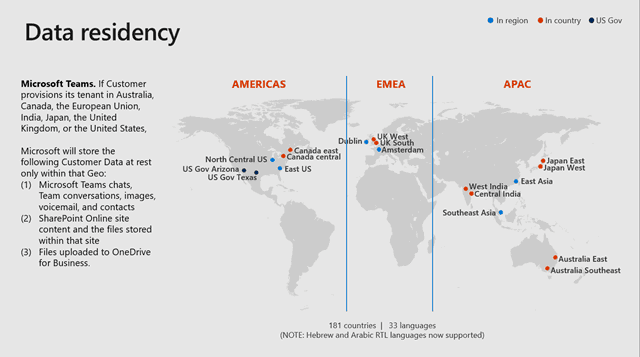 It’s worth noting that data in Microsoft Teams resides in the geographic region associated with your Office 365 tenant. Currently, Teams supports Australia, Canada, France, India, Japan, United Kingdom, Americas, APAC, and EMEA regions. Teams currently offers data residency in Australia, Canada, France, India, Japan, and the United Kingdom for new tenants only. However, even if you have specifically chosen a country for data residency, your meetings will still be hosted on one of the regional conference services based on the first joiner.

To see which region houses data for your tenant, go to the Microsoft 365 admin center > Settings > Organization profile. Scroll down to Data location.

What if the first joiner is in Singapore and everyone else is in Europe?

This can happen, if the first joiner is in a location far from the other joiners, the meeting will be hosted in a suboptimal location. The odds are this won’t happen often (based on the fact that if the majority of users are in location X, they are Y times more likely to be one of the first joiners).

Even if it does happen. It’s optimised as much as possible. Everyone joining a Teams meeting will route from their endpoint onto the Microsoft Network as close to them as possible, and their media will route via a Transport Relay 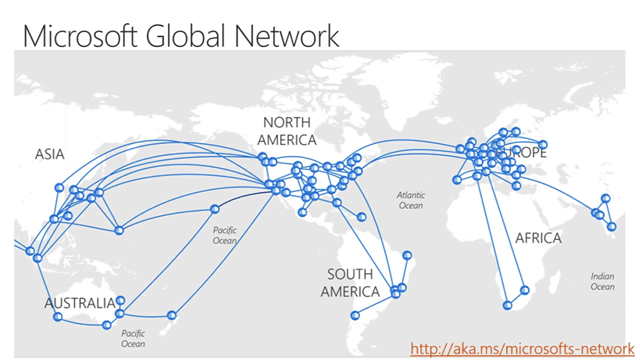 Microsoft has a huge global private network, the second biggest in the world. Fibre connections between regions give optimal routing around the world, minimising hops and latency.

Microsoft uses an SDN-based architecture called SWAN to manage their WAN, which enables centralized management and control of network infrastructure and improves reliability and efficiency. SWAN controls when and how much traffic each service sends and automatically reconfigures the network’s data plane to match traffic demand. Microsoft’s objective for its network is zero jitter and packet loss.

Microsoft wants your traffic to get off “the internet” and on to their private optimised network as soon as possible. They are peered (directly connected) with over 2,700 ISPs in 190 locations over 38 countries. This means if you are using one of those peered ISP’s your traffic will go directly from your ISP to Microsoft’s network.

This is why Microsoft is keen for you to use local site internet breakout rather than routing over your organisations WAN before breaking onto the internet somewhere central. The odds are strong that getting onto Microsoft’s network as soon as you can is going be the best performing network route. 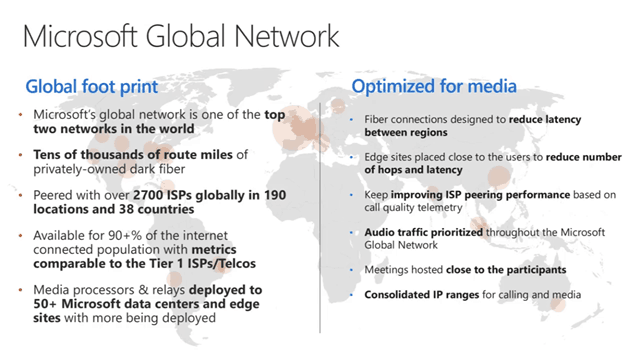 Transport Relays (new cloud incarnation of what was Skype for Business media relays) are part of Office 365. They will relay media traffic if a client can’t make a direct connection and also from Teams client to the conferencing server/service.

Transport relays are deployed to more than 50 Microsoft Data Centres and Edge sites. 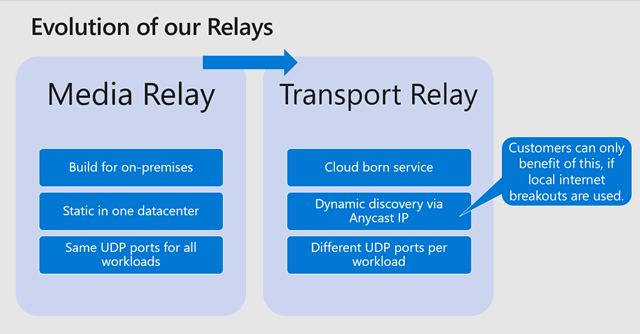 Transport relays use an anycast IP address. The same IP assigned to geographically dispersed servers and IP routing ensures the client will connect to the “closest” instance, based on the endpoint location. There are some exceptions

Location of data in Microsoft Teams

Transport Relay aka TRAP on Skype for Business and Teams