As mentioned as coming soon in an earlier roadmap post, there are now more details available on “Regionally Hosted Meetings” (previously code-named “Multi-National Corporation, MNC). Here is what you need to know.

“Regionally Hosted Meetings” is a new feature/ability in Office 365 Skype for Business Online, where you can choose to home meetings (and actually users for their SfB registrar workload only) in an Office 365 data centre more physically local to the user.

Previous to this feature, when you setup an Office 365 Tenant for a company, you had to pick one data centre region (location) globally to host all users and services. This is a challenge for companies with multiple offices/users/locations globally as all services run out of a single data centre region. This is particularly suboptimal for Skype for Business as all conferencing goes back to that region globally, meaning if I have a tenant in EMEA but users in Asia/Pacific, my APAC users have to connect all the way back to an EMEA DC/Skype for Business service, adding latency and potential network issues.

Now with this feature, you have a single tenant region, but specifically for the Skype for Business workload, you can set individual users to be homed in different locations. Even though the marketing name is “Regionally Hosted Meetings”, what you are doing is asking Office 365 to move the user to a registrar in the new region, so their sign in, IM signalling and meetings will be in that region. Their mailbox and other workloads remain in the default tenant region/DC.

Why is it called “Regionally Hosted Meetings” and not “Regionally Hosted Users”?, I have no insider knowledge, but I’m guessing so as no to confuse people who might think the users are moving for more than just the Skype for Business workload.

What is this not?

What about PSTN Calling?

Interestingly PSTN Calling media is already kept local today, so today I have am homed on a US tenant and have Microsoft PSTN Calling in the UK, my signalling goes via the US tenant, but my media stays in region.

When and how can I get Skype for Business Online Regionally Hosted Meetings?

The Steps to enable Regionally Hosted Meetings are:

Which Regions are Available? 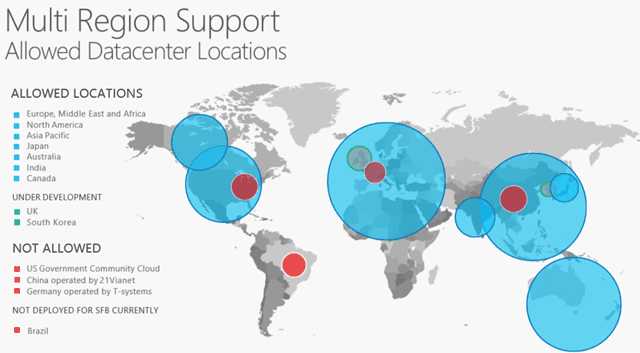 Not Deployed for SfB Currently