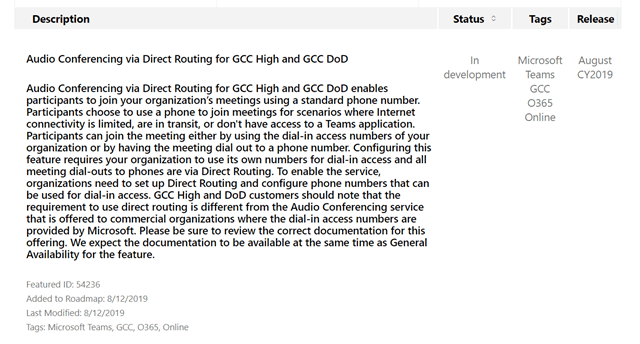 A really interesting Microsoft Teams Roadmap Item has just been listed as in development and for release in August, so basically anytime now.

Audio Conferencing is the feature name for adding PSTN phone numbers to your meeting to be able to dial into them on a regular phone, and the ability to dial out from a meeting to a regular phone. Up until this announcement the only option in Microsoft Teams was to buy this from Microsoft. You could not “bring your own SIP trunks” or use a certified partner PSTN carrier (like you could in Skype for Business Online, a feature called Audio Conferencing provider).

In Microsoft Teams you can bring your own trunks/carrier/numbers for user phone services and for auto-attendant and hunt groups, but not for conferencing. Something customers have asked for previously for both technical and commercial reasons.

A tenant license and at least one user license are required to enable the service. The tenant and use licences are specific to this feature and only available on GCC High and DoD tenants.

Full details are here, but essentially you take a direct routing PSTN number and assign it to the Conferencing bridge via PowerShell.

Only in GCC High and GCC DoD?

The feature is listed as only for GCC High and GCC DoD Tenants. GCC standards for Government Community Cloud, a specific type of Office 365 tenant to meet the requirements of the United States public sector. There are three types of levels,

You can’t just get these tenant types, and they are not available for general trial. Specific Government data centres are available only to government agencies or departments—or commercial companies that have been authorized to hold and process-controlled information on behalf of the US government. Access to customer content is restricted to screened Microsoft personnel who are US citizens and has passed required background checks. Data is stored within the continental United States with compliant infrastructure

Due to the extra security and audit requirements, and being run in specific data centres, features often lag between Office 365 commercial (standard enterprise Office 365)  and the GCC variants. For example here is a list of Microsoft Teams Features that are available and not available in GCC Tenants.

The feature lists shows (PSTN) Audio Conferencing, which is the PSTN conferencing service from Microsoft, as available in GCC tenants, but not GCC High (on the backlog) or GCC DoD. So it makes sense Microsoft would offer this service to GCC High and DoD to unlock PSTN conferencing for them.

Note, even with this new ability, at time of writing the following are not supported

Will PSTN Audio Conferencing via Direct Routing come to other Office 365 tenant types?

This is the big question. Evidently, there is something about GCC High and GCC DoD that makes Microsoft’s PSTN conferencing service not fit either commercially, technically or compliance wise. However, this feature shows it is technically possible to route your own numbers into a Microsoft Teams conference via Direct Routing. Some examples of customers who may want to do this include:

It will be interesting to see if this feature is made available outside of GCC High and DoD. Be sure to subscribe to my email updates if you want to stay updated.