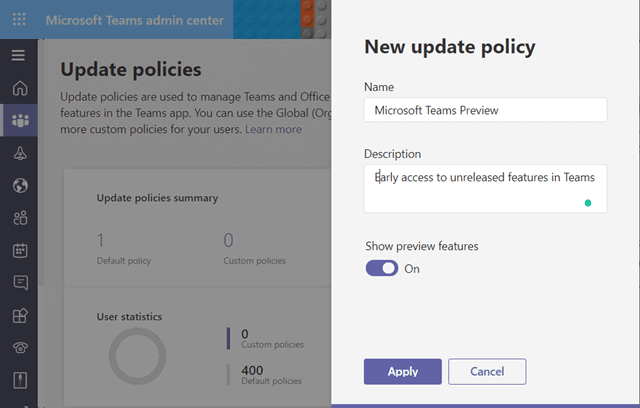 Back in June, a Microsoft blog explained Windows Windows is “transitioning and converting our current ring model, based on the frequency of builds, to a new channel model”. It also said that Microsoft Teams would move in the same direction.

Microsoft Office runs on a channel model (naming has changed a few times, now it is:

Even though Microsoft Teams is “part of office” it was developed using a new ring based methodology and many new technologies. Putting users in the Current Channel (Preview) (or any other office channel for that matter). Has no effect on how Microsoft Teams is updated. By default, end-users are updated on a rolling basis.

Microsoft Teams has the TAP (Technology Adoption Program), but this is a private limited program for select highly engaged customers with lots of testing requirements. There is also a public developer preview, but that is not aimed at end-users. Up until now, there was no way for a typical customer to elect for some users to get features early for learning/testing/communicating about new features.

Rolling out now is a new Microsoft Teams update policy, set in the Teams Admin Center, that allows administrators to enable early access to unreleased features in Microsoft Teams for select users in their tenant.

This feature is still rolling out, the admin and client work to receive the updates should be done by end of December.

Microsoft will be sharing the features in Microsoft Teams Preview  here https://docs.microsoft.com/en-us/officeupdates/current-channel-preview

If users wish to give feedback to Microsoft, they can use Help > Give Feedback in the Teams client.

Microsoft has also set up a Microsoft Teams Public Preview space on the Tech Community. You can check it out here