Update 9th February 2022: Further clarification on this is coming from Microsoft and partners shortly. I’ll further update the blog when I have more details. Customers can reach out to the OEM to understand their strategy for keeping the devices Teams certified. Microsoft and OEM partners provide 2 additional years of support once certification is expired.

Microsoft Teams certified devices on Android now have a Current certification end date, listed for each device on the Microsoft documentation website. Many Teams devices run Android as an OS including Teams Phones, Teams Rooms on Android, Teams Displays and Teams panels

The certification end date relates to the current version of Android the devices are running. At the time of writing the dates are

OEM device vendors can update/provide updates for the underlying Android OS and if they do the current certificate end date will be extended by Microsoft. The update process and the number of Android versions an OEM will provide/can provide based on their chosen chipset (SOC) will vary greatly from OEM to OEM and device to device, so it’s important to understand the support timeline when you are choosing devices.

Right now it is hard for customers to know where a device is in its product/support lifecycle. Microsoft does plan to add the initial date a device was certified to the docs, which will help.

With the new clarity on certification end dates, the certified vendors are now working on how they communicate their plans for updating Android OS (or potentially not) and/or offering trade-in/upgrade programs. The specific versions a device will support will depend on the chipset and other factors.

I am speaking to each of the device vendors and all are in the process of producing formal support statements on this. I will keep updating the blog with statements and vendor links as soon as I have them. This is an evolving conversation so it may take some time for vendors to get public statements out.

Audiocodes – I have had a conversation, awaiting an official statement

Lenovo – I don’t have a contact here anyone can help?

Logitech – I had a great discussion with Logitech. They are already on Android 10 and appear to be carefully considering their chip and hardware choices to give them maximum headroom to update. A formal statement is coming shortly. Logitech already have some really good public information on their approach to Android and secure development practices

Poly – Poly have publicly on Brandon Rebbe’s LinkedIn addressed this in a FAQ document saying “Poly will provide a software update that will include the updated Android OS”. No word on when or how yet, or to what Android version on each device, but great to see a public statement.

If you have Poly kit you can contact Poly on this at TeamMicrosoft@Poly.com

Yealink – Good engagement, they will have a public update plan in the coming weeks

Why do Teams Devices have certification end dates?

The reason for the certification end dates based on the Android OS is the supportability and security of the underlying OS and meeting Microsoft’s security requirements. endoflife.date gives a good list of Android releases and their security support status: 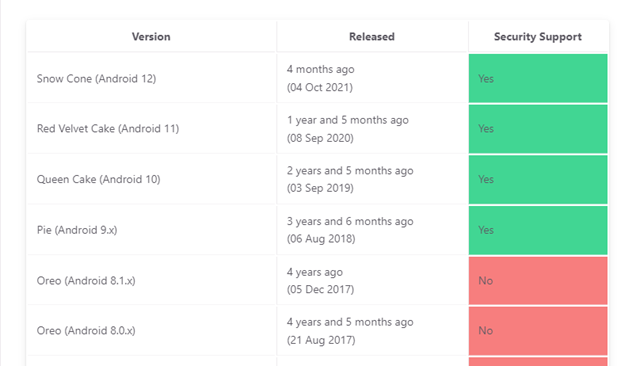 I can’t find any official Google/Android open source project links for the Android support lifecycle or dates. Please let me know if you know of an official reference.

How does Android on Teams Devices work?

Teams Devices, and many other enterprise and consumer devices run Android OS. This is not the Android you get on your consumer Google and Samsung mobile phones, but bespoke cut down variants of android from the open-source project written by the SoC (System on a Chip) vendor or ODM (original design manufacturer). The SoC vendors/ODMs have to build new major version Android releases (Board Support Packages) for the SoCs and charge the OEMs for these Android updates/new major version releases.

Device OEM’s (the ecosystem partners you buy Teams devices from) can/could update the underlying Android OS on devices to further extend their Microsoft certification/supportability. However, they may be limited by what their chosen SOC supports. Typically a SOC will have support/headroom for 2-3 major Android versions.

How do support dates on Microsoft Teams Room on Windows work?

I’ll be adding more to this blog as I get more information from Microsoft and the device vendors. Be sure to subscribe for my Microsoft Teams news email update if you want to know the latest on this and Microsoft Teams.