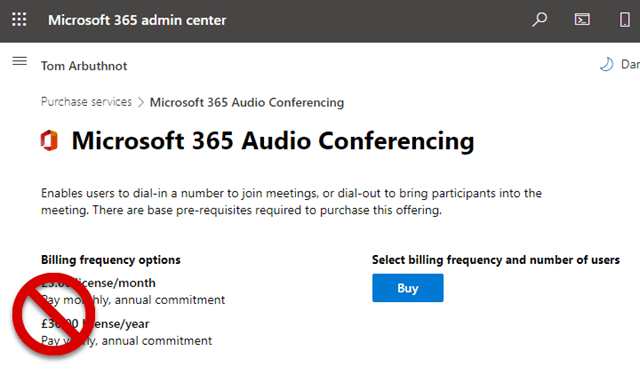 “And today, we are announcing that we will add unlimited dial-in capabilities for Microsoft Teams meetings across our enterprise, business, frontline, and government suites over the next few months.”

Currently, Microsoft’s PSTN Audio Conferencing is included with Microsoft 365 E5 and Office 365 E5 but requires an add-on licence for other licences below this such as E3 (a very common licence for enterprises) and other business, frontline and government licences.

E5 is about 8% of the Office 365 commercial base or around 24 million users. Office 365 as a whole has over 300 million commercial paid seats, so this move will open up Microsoft Teams PSTN dial-in conferencing to a very large number of customers with no additional licence required.

Of course, Microsoft is also increasing the prices of a lot of these plans,

The increases are less than, or in the case of E3 equal to the $4 PUPM for the Microsoft PSTN conferencing addon. Of course, that logic doesn’t apply to E5 which already has PSTN Audio Conferencing but still gets a price increase. There are no price increases for Education or Frontline worker plans.

What about the cost to dial out from Microsoft Teams Meetings?

Some users want to have the meeting dial their phone or want to dial out to bring a PSTN/Phone user into the meeting. The blog specifically says “unlimited dial-in capabilities”. If it works like the current Microsoft PSTN conferencing licence, each licenced user gets a pooled 60 minutes per user per month that can be used to dial out to non-premium numbers in ANY of the Zone A countries. After that, or for dialling out to non-Zone-A countries, there is a per-minute cost which is covered via communication credits. More details from Microsoft docs: https://docs.microsoft.com/en-us/microsoftteams/audio-conferencing-subscription-dial-out

I’ve reached out to Microsoft to confirm what licences/SKU’s will be included and will update the blog when I have further detail. Be sure to subscribe to my email update to keep up with the latest Microsoft Teams news.