In Message Center message MC247825, Microsoft announced that they will be pushing a banner (advert, in my opinion) in the Teams mobile app activity feed saying that users can add a personal account to the Teams app on their mobile device. These banners will begin at end of April will roll out to all customers by the end of December.

Teams is off the charts in terms of enterprise use, but Microsoft seems keen to push it harder in the personal/consumer space. Enough to potentially ruffle some feathers with enterprises by pushing promotion for using Teams for personal in the mobile client.

If your organisation has previously disabled the ability to add additional accounts to Teams, users will not see the banner.

If you have not disabled additional accounts/personal accounts, but don’t want the banner to be pushed to your users, you can raise a ticket with Microsoft support, via the Office 365 admin portal (Microsoft 365 admin center) and ask for your tenant to be excluded from the banners.

There is no need to justify to support wanting to not receive the banners, anyone who asks via support will have them turned off. Microsoft is keen to hear and collect customer reasons for not wanting the banner so they can collect this feedback for the product group.

Raising a ticket with support will not limit your end user’s ability to add a personal, work or school account to the Teams app, just suppress the banner.

There are plans to have a switch/setting on the Microsoft 365 admin portal to allow tenant admins to directly turn off these promotional banners without needing to raise a support ticket in the future, but there is no public ETA on this.

It will be interesting to see where the line is drawn here in terms of Microsoft promoting services directly to end-users of paying organisations. Will we start seeing promotions for Xbox in PowerPoint?

Tony Redmond has already done a good write up on this issue too here: Microsoft to Push Ads for Teams Personal to Corporate Users – Office 365 for IT Pros (office365itpros.com) 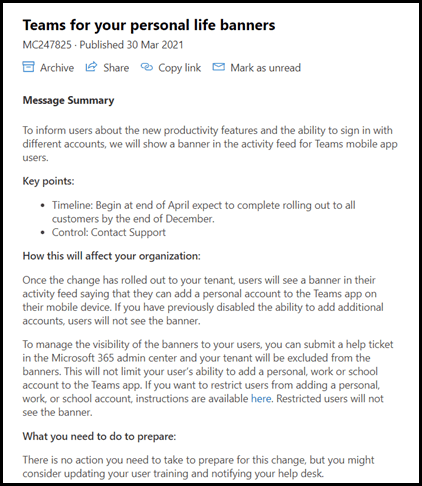