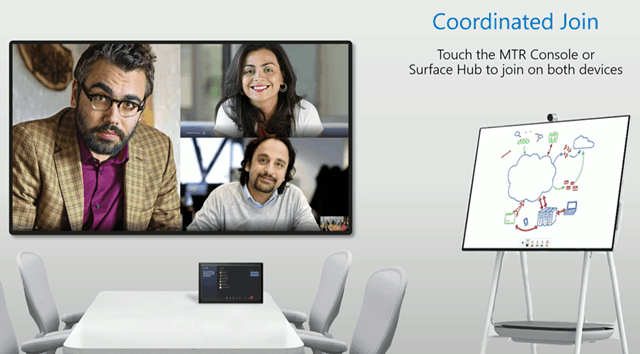 It’s interesting as the Surface Hub can join Teams meetings and has audio and video, but It’s really not a meeting room device. It also runs its own OS so doesn’t/can’t run the MTR app and have MTR certified Audio and Video devices plugged straight in. So there is a use case for having both in the same space.

Coordinated Meetings, as the feature is called (“better together” for MTR’s and Surface Hubs), lets you set up your Teams Rooms and Surface Hub so that when you join a meeting on either device, the other device in the room is also joined to the same meeting and they work together.

How you configure which devices take which roles depends on your specific environment, but the recommendation is:

You could configure them differently if you prefer, but in most cases, the MTR will have a better camera and microphones and be positioned better.