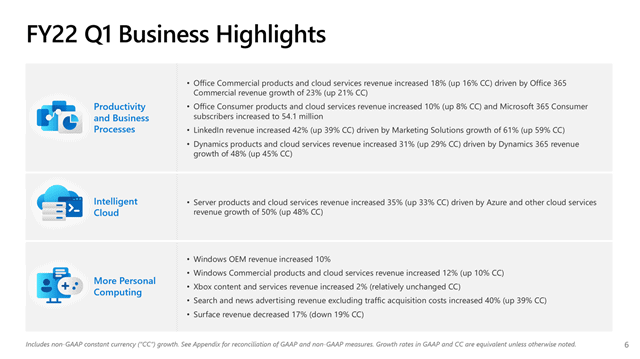 Microsoft released its FY22 Q1 results yesterday. It is always interesting to keep an eye on what is being talked about in the results as it shows the areas Microsoft want to highlight.

Results for the quarter ended September 30, 2021, as compared to the corresponding period of last fiscal year:

The results cover all of Microsoft’s business, and Azure was a big focus. I like to look specifically at M365/Teams. We got no new Daily Active User or Monthly Active user figures, so the latest we have is still from July 2021, 250 million monthly active users, 80 million monthly active p2p and Phone calling users. We did get the following details from Satya on the earnings call:

“Users” was not defined as daily or monthly active, but in the past, Microsoft has only counted “active” users rather than licenced or “auto signed in” users.

Operator Connect got a call out, which I still think is a much bigger deal than most people realise. Schlumberger, Westpac, ZF Group, REI, and SAP were called out as Teams Phone users.

Teams Connect Shared channels got a mention. Look out for a session on that at Microsoft Ignite next week, it will be a real improvement to cross-organisation collaboration in Teams. Satya even said “without switching tenants”, Microsoft always tried to play down the pain of “switching tenants” with the current guest access model.

Continued impressive growth. I hope we start to get some more detail on the number of licenced/active Teams Phone users with PSTN connectivity, as that is clearly one of the big potential areas of growth for Microsoft Teams. It’s also interesting to see the frontline and line of business apps usage growth.

Be sure to subscribe to my email update if you want to stay on top of all the latest Microsoft Teams news, especially the news next week from Microsoft Ignite!