23rd July 2019 Update. Thanks to Corbin Meek, Senior Supportability Program Manager – Teams and Skype for Business at Microsoft for reaching out with an update/clarification. SfB Server 2019 us supported on virtualisation, see details here: Clarifying Support for Skype for Business Server 2019 Virtualization

I was doing some research after a customer asked if they could put SfB server “in the cloud” (on IaaS) in a Microsoft supported way.

Note, the question is not “will it work”, it’s “will Microsoft support it”. It’s not a great idea or very cost-effective, again, those were not the question.

I said that you couldn’t put in on Azure (not supported at all by Microsoft) but that Microsoft support SfB on virtual, so if an IaaS provider could meet the correct virtualisation requirements it would technically be deployed to a Microsoft supported standard.

Then I went to find the documentation to check what the current recommendations/requirements are for SfB on virtualisation, but I found nothing. A support ticket to Microsoft and some conversations confirmed that today, SfB Server 2019 is not supported on virtualisation. If you need to reference this, its support ticket 201903130920012175.

If support for virtual changes, I will update this blog. You can subscribe for email updates

Lync 2013 was supported on Virtualisation

I can’t find a good public reference for SfB Server 2015 support stance on virtual, but here is one for Lync 2013

“Lync Server 2013 supports virtualization topologies that support all Lync Server workloads, including instant messaging (IM) and presence, conferencing, Enterprise Voice, Monitoring, Archiving, and Persistent Chat. Note that Lync Server performance on virtual topologies can vary greatly depending on the workloads being used, the number of users, and the host hardware.”

Thanks to some MVP friends for helping dig these links up.

There are some “hangovers” in the SfBS 2019 docs documentation which mention virtualisation (at time of blog publication), e.g. 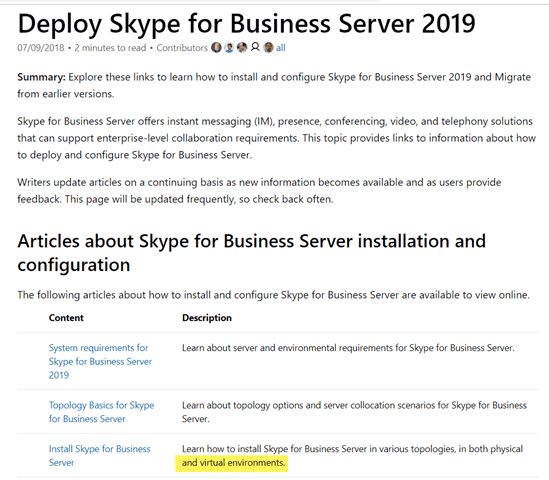 I have reported these as needing updating/clarifying.