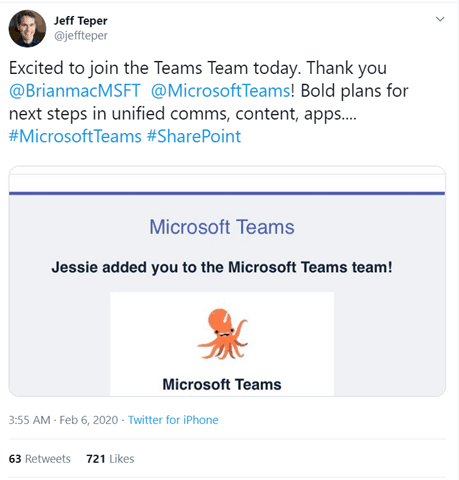 Exciting news this week. Jeff Teper, who is Microsoft Corporate Vice President of Office apps, SharePoint, OneDrive and Stream is taking over leadership of Microsoft Teams. CVP Brian MacDonald, who has been heading up Microsoft Teams, is retiring.

MacDonald conceived of the product that became Microsoft Outlook and served as General Manager of the Microsoft Outlook team for its first release. In 2015 he wrote a document to pitch what would become Microsoft Teams and was key to it’s vision, development and direction to date.

Jeff Teper takes it on alongside SharePoint, OneDrive and Stream. Jeff has been at Microsoft for 28 years. Previous roles include Corporate Vice President for Corporate Strategy, Office 365 Program Management and General Manager for SharePoint. Jeff has been referred to as the “father of Microsoft SharePoint”, so clearly someone that understands collaboration.

This was announced as part of a bigger shakeup with Microsoft combining its Windows client and hardware under Chief Product Officer Panos Panay and Corporate Vice President Joe Belfiore moving over to Office.

What does this mean for Microsoft Teams?

I think it’s great news that Microsoft Teams and SharePoint are now under the same CVP. SharePoint is a foundational component of Microsoft Teams, so the more aligned the products visions are, the better the end user experience is likely to be. Stream is also a key to Microsoft Teams.

The relationship between Teams and SharePoint has clearly got stronger over time, but there is room for improvement. Examples of where the products could work more nicely together

Generally the day to day experience is good, but I hope having a single CVP over both products will bring them even closer and close the little user experience gaps. Single leadership across all the products can only be a good thing.

What are your thoughts? What do you want to see in terms of Microsoft Teams, SharePoint, OneDrive and Stream working more closely together?

Want to stay updated on what’s coming in Microsoft Collaboration, check out my bi-weekly email update.

How Microsoft built its Slack competitor – The Verge

Meet the father of Microsoft SharePoint: Jeff Teper – All About Microsoft