A few weeks ago I had the pleasure of a going to the Crestron’s New Jersey Offices. In particular, the focus was on their Crestron Flex range, which supports both Microsoft Teams and Skype for Business. They have an extensive demo suite, and I also got a behind the scenes tour of some of the prototyping and the extensive testing they do.

I’ve been in the UC space for quite a while, and know the Crestron brand from the Room Automation/AV space, but it was great to learn more about their Microsoft device story. 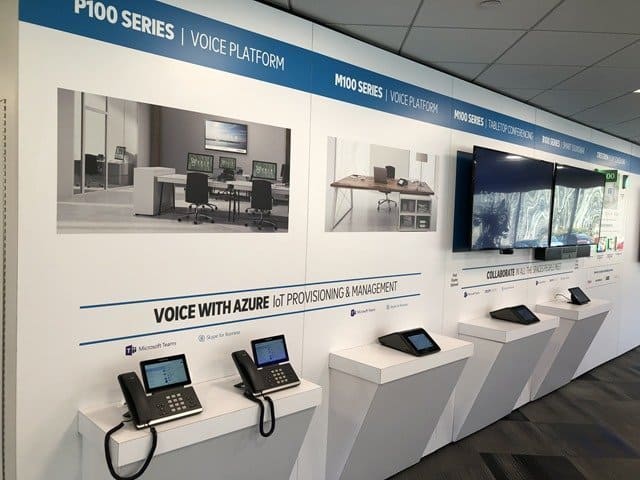 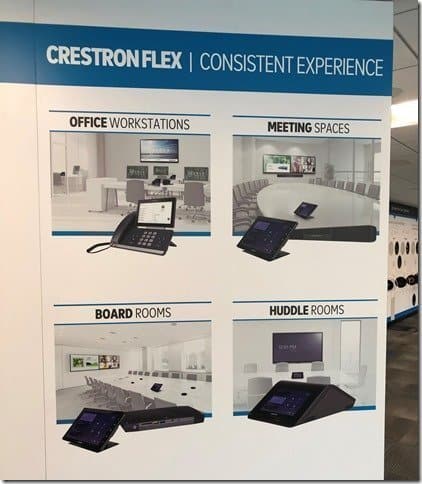 The marketing names take a bit to get your head around, but Jimmy Vaughan, Crestron UC Technical Product Manager, gave me a quick cheat sheet 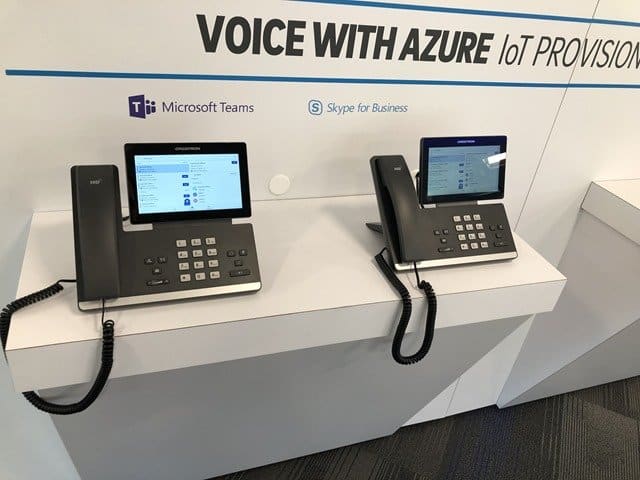 These are rebadged Yealink Phones. It was nice to see Creston be open about that. Same firmware, so they can run in either Skype for Business or Microsoft Teams mode.

Why would you buy the Creston version over Yealink? Crestron has an XiO cloud service which offers zero-touch deployment. With only the serial number and device MAC address, which are provided at shipment, a network admin can remotely configure the phone before the device it arrives on-site. You also deal with Crestron directly for support and warranty. 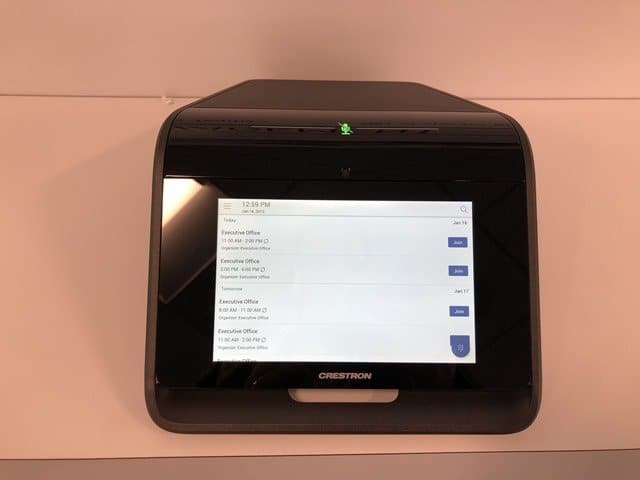 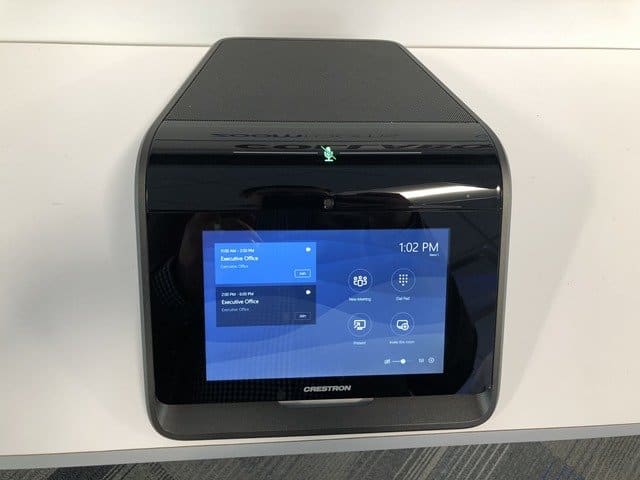 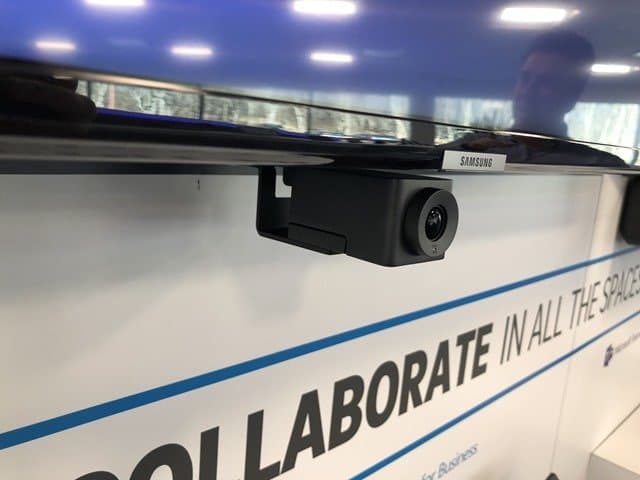 A native SfB/Teams conference phone. The M150 is the same device form factor with an Intel NUC PC at its core a Huddly IQ camera video camera. A nice feature is a PIR that wakes system (touch screen and video display) and reports room occupancy to Crestron Fusion. The M100 is an audio-only device in the same form factor. 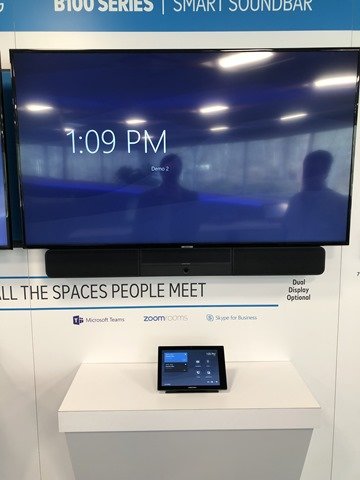 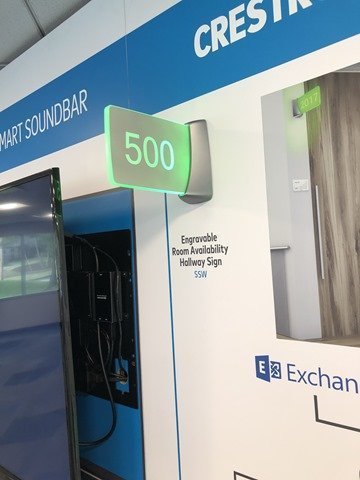 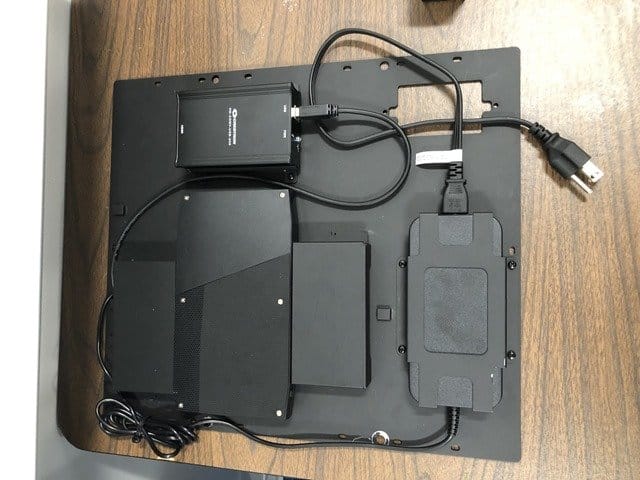 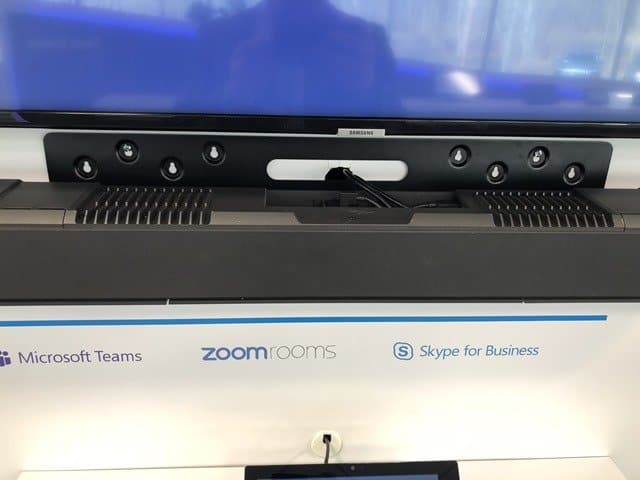 Soundbar pivots forward on the hinge.

There are some nice touches here, for example, the soundbar is on a hinge that feels really solid, but can pivot forward to get to the connectivity. The wall mount PC ships ready to mount, minimising install effort. This is a complete kit with all the pieces and cables you need.

Like the other Crestron devices, the Flex B160-T allows the ability to integrate with a Crestron control system to enable touch screen control over room lighting, motorized window shades, climate control, AV, etc.

User interface wise the C100 series is the same as the B100, the same Table top touch screen, but this is a System Integrator Kit for Microsoft Teams. It contains just the touch screen and the wall mount PC running Microsoft Teams Rooms software, but no camera or soundbar. System integrators can pair their own choice of cameras, speakers, microphones, mixers, switchers, and audio conferencing interface. For example the Crestron Avia DSPs and amplifiers. 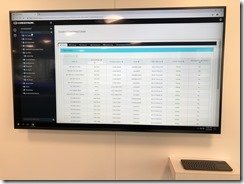 There are a lot of Skype for Business/Microsoft Teams Rooms options out there. I came away from the day feeling that Crestron is definitely committed to this space. It was great to see the development and extensive testing that goes into their devices. I even saw the OEM Yealink phones being put through their paces.

The XiO cloud service is really where they offer some potential unique functionality, and of course, they have a plethora of room management and AV systems that can be integrated with these devices. Definitely, some interesting options here that are worth a look.

Many thanks to Jimmy Vaughan for the time and detailed tour. He is worth following to stay up to date on the Crestron Microsoft story.