As many organisations move to “hybrid working” we are seeing a massive uptick in video use by people in the office, way higher than pre-pandemic for the same user counts. This seems to be mainly due to using video being more embedded as a default habit for users and also working hybrid means more video for those who are remote.

That presents a challenge that some sites may not have the bandwidth to support scale use of video. A new feature coming that allows IT Admins to create policies for Network Roaming and Bandwidth Control in Microsoft Teams.

This feature is scheduled to roll out in early June and to be complete by late June.

The?TeamsNetworkRoamingPolicy PowerShell cmdlets enable administrators to provide specific settings from the TeamsMeetingPolicy to be applied based upon the network location of the Teams client.

The TeamsNetworkRoamingPolicy cannot be granted to a user but is assigned to a network site.

This feature will provide some relief to network admins worried about specific sites with limited bandwidth. 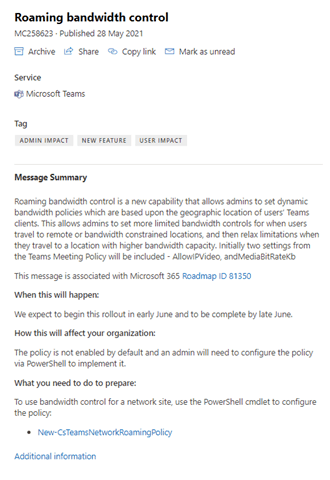