“Hybrid” is possibly the most overused word in our Microsoft world. It means everything and nothing. I often cringe when people talk about their topology as “hybrid” without defining it further, I even try to ban using “hybrid” without any context at Modality :-).

If you have 100% SfBS and Exchange UM On-premises, or 100% SfBO/Microsoft Teams and Microsoft PSTN Calling plans, you are not hybrid, and things are nice and easy. For the uninitiated “hybrid” means some workload(s) on customer premises (or hosted by a partner) and some workloads in Microsoft Office 365. Here are the 5 types: 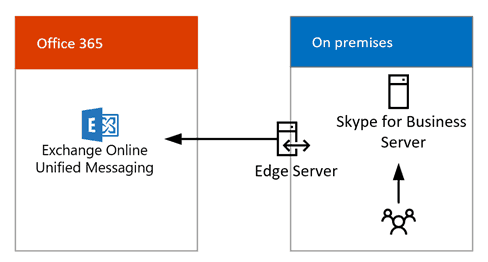 In this scenario, all users are homed on-premises on Skype for Business Server, but their voicemail is routed via an Edge server to Exchange Online Unified Messaging, which “answers” the call, records the message and puts it in an Exchange Online User Mailbox.

Where this makes sense?

Side note, you used to be able to connect third-party IP PBX’s to Exchange Online Unified Messaging, but this has now been depreciated.

Where this makes sense?

“Split domain” does not define where PSTN (telephony) is connected or even which features/modalities are enabled in SfBS and SfBO, so whenever someone says they are split domain there are some follow-up questions/options

A bit of a Microsoft insider phrase. This is specifically a setup for SFBO users routing their user PSTN calls via SfBS. Therefore it’s a configuration option when you have a Split domain setup. Indeed you may set up a Split domain and have 100% of your users on SFBO with OPCH; it’s technically still split domain.

This is only for routing user PSTN connections, Cloud PSTN Conferencing and Cloud Auto Attendants/Hunt Groups require numbers from Microsoft (you can potentially 1:1 forward to from your PSTN numbers to Microsoft numbers)

In this scenario, 100% of users are on SfBO, but a specific appliance, the “cloud connector edition” allows the customer to connect their own PSTN carrier for user numbers to SfBO. Cloud Connector Edition can be installed on a commodity server or can be bought in an appliance from AudioCodes or Sonus.

AKA names while in development: Hybrid Voice Connectivity, Bring Your Own Trunk (BYOT), Direct Connection For Microsoft Teams 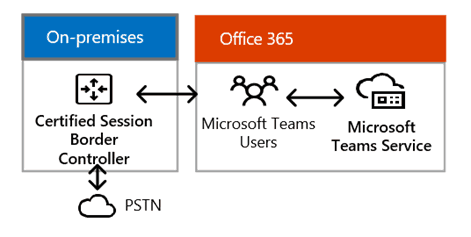 Still a roadmap item. So there is limited public information available and a few names floating around. What has been shared is that this will allow customers to “bring their own user PSTN” for Microsoft Teams users. It will use certified Session Border Controllers from Ribbon (previously called Sonus) and AudioCodes which will connect directly to the Microsoft Teams cloud service. It will not require a windows server(s) like CCE.

So hopefully you are now armed with the different types of “hybrid” and can explain the differences.

Thanks to this document from Microsoft for the graphics I adapted: Plan your Skype for Business hybrid deployment