Update 22.10.2017: We heard at Microsoft Ignite that making CCE work alongside SfB Server in the same customer/topology is no longer on the roadmap for CCE. Instead, if you have SfB Server and wanted CCE alongside it, Microsft is recommending instead a small deployment of SfB Server in the OPCH model or AudioCodes CloudBond which is essentially a single “CCE like” appliance but it runs full server so can run OPCH. Sonus’ CCE can also run Server on the appliance blade in “OPCH model” but they don’t have a SKU to buy it/have it officially supported by them in this model. Note all these models run full SfBS server in the “appliance”. You can find the Official announcement here: https://techcommunity.microsoft.com/t5/Skype-for-Business-Blog/New-CCE-version-due-later-in-November/ba-p/123336

Cloud Connector edition 2.0 was just released, and it has some exciting new abilities including Media Bypass and up to 16 CCE’s in a “CCE site”.

Media Bypass allows the audio network traffic stream (media) to not route through (bypass) the CCE Mediation server, meaning it can route direct between the SfBO client and the Session Border Controller or gateway, allowing fewer network hops and enabling new CCE topology Options. This should also allow more calls per CCE, but Microsoft has not offered any official guidance on the expected number as there are too many variables for them to model the expected number of calls that will bypass.

Having up to 16 CCE boxes in a “CCE site” (should have been called a CCE Pool IMHO), allows up to 7,500 calls per “CCE site”, and that’s the number without Media Bypass factored in.

One thing that is hotly requested and didn’t make the cut for 2.0 is Coexistence of CCE alongside an existing SfB server hybrid deployment

Today you can only have SfBO hybrid with On-Premises Server *or* SfBO “hybrid” with Cloud Connector Edition. “Hybrid” is the most overused term these days and means everything and nothing, so a quick terminology level set:

SfBO – Skype for Business Online, the SfB Service from Microsoft that is part of Office 365.

Hybrid – Can mean all sorts of Microsoft Cloud/Server topologies (Exchange Hybrid, Identity/Azure AD Hybrid) and within SfB can mean quite a few different topologies, as much as possible I try to avoid the use of generic “hybrid” and instead use one of the below terms.

SfB Split Domain Hybrid – Simply means that SfBS (or Lync Server) has been “connected” to SfBO/Office 365. Implicit in this is that “Identity and Authentication” is setup between the customers Active Directory and Office 365 (AzureAD/ADFS or some other configuration) and that users can be moved between SfBS and SfBO. This does not define the “type” or users (IM/P, EV, Cloud PBX) on either SfBS or SFBO.

CCE – Cloud Connector Edition, the “downloadable appliance” or “purchased appliance” that allows a customer to connect their PSTN (Public Switched Telephony Network) carrier to SfBO for user phone numbers. Allowing users to make and receive calls from a SfBO Cloud PBX account from a carrier the customer “brings” to the service. Today CCE does not work alongside other “Hybrid” topologies. Implicit is that a CCE user is SFBO and Cloud PBX

OPCH – On Premises Call Handing. This is a term used inside of Microsoft to describe a SfBO Cloud PBX user who has PSTN carrier connectivity for their user phone number “call handling” via “On-Premises” SfB Server. Implicit is that the OPCH user is SfBO and Cloud PBX and that SfB Split Domain Hybrid is setup. Today this cannot coexist with CCE.

EV – Enterprise Voice. Meaning the user is a SfBS (LyncServer) user with the ability to make and receive phone calls

Many customers have SfBS deployed, possibly already in Hybrid but also want to deploy CCE, today that is blocked; you must be either SFBO and CCE or SfBO and SfBS hybrid. Why would you want both? Some examples: 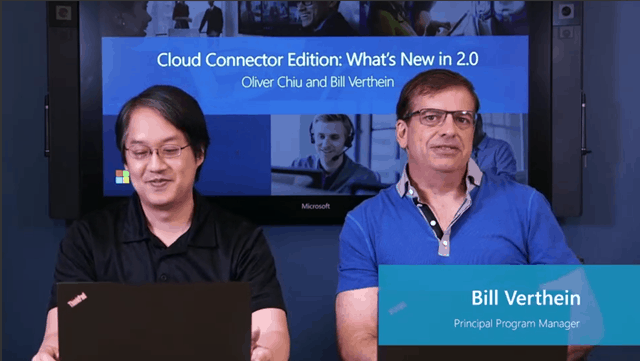