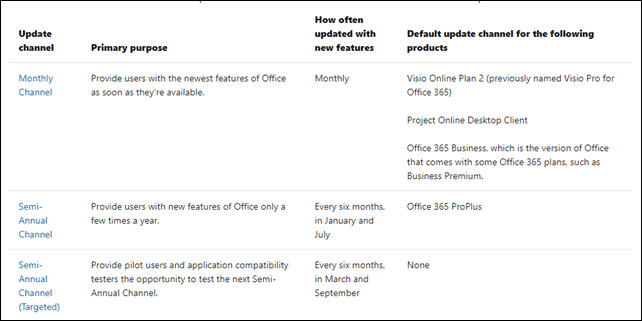 Beginning January 14, 2020, the Microsoft Teams client will be automatically added to existing installations for customers on the Semi-Annual Channel.

Office 365 ProPlus, the office clients install that comes with Office 365, has a method for administrators to control the pace of feature updates, called update channels.

Microsoft has previously added Microsoft Teams to Monthly channel users from July and new installs. As part of the normal update process, the desktop Microsoft Teams client will be installed by default on devices running Windows and will start by default. To complete the installation of Microsoft Teams after the Office update, either restart the PC or have the user log off and log back on.

If your organization isn’t ready to deploy Microsoft Teams and you use Group Policy, you can enable the Don’t install Microsoft Teams with new installations or updates of Office policy setting. You can find this policy setting under Computer Configuration\Policies\Administrative Templates\Microsoft Office 2016 (Machine)\Updates.

If you prefer, you can use Group Policy to prevent Microsoft Teams from automatically starting when users sign in to their device. To change this behaviour, you must act before Microsoft Teams is deployed.

There is no change to existing installations on Mac devices. This change does not affect users who already have Teams installed on their machines.

If you have Office 365 Business or can’t use Group Policy for some other reason, you can add the PreventFirstLaunchAfterInstall value to the HKEY_CURRENT_USER\SOFTWARE\Policies\Microsoft\Office\16.0\Teams key in the registry. The type for PreventFirstLaunchAfterInstall is REG_DWORD and the value should be set to 1 if you don’t want Teams to automatically start after installation.