Workplace by Facebook is a separate division of Facebook that offers a private dedicated Facebook-like experience for organisations.

They position it as both an “Enterprise Social Network” with New Feed and for Team collaboration, with “collaboration spaces” with files and discussions. It also has chat, video conferencing and video broadcast.

They also have a heavy focus on connecting front line workers. Something Microsoft now seem focused on too. 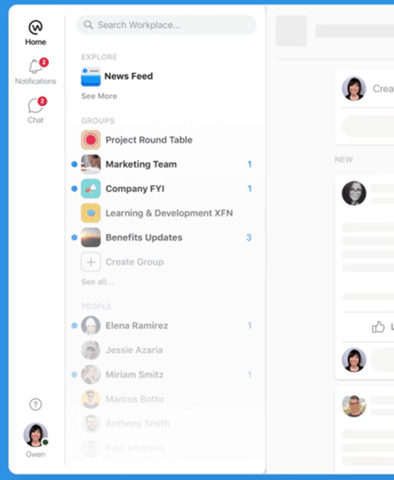 They recently announced they are up to 3 million paid users. They boast some pretty big brands and say they have over 30,000 global organisations large and small using Workplace.

Workplace has a free tier, as well as a $4 per user per month subscription, and an $8 per person a month enterprise plan. Workplace plan to add a $1.50 plan for frontline workers.

Want to learn more about how Facebook position workplace? Check out this UC Today interview with Karandeep Anand, Head of Workplace by Facebook.

Microsoft has a slightly different spin on this. They have Yammer as an Enterprise Social Network and Microsoft Teams for Team collaboration. Personally, I like the mental separation of Enterprise Social and “getting work done”, but I can see how people might like the “one tool to rule them all” story too. It also feels like Microsoft are pulling some ESN like features into Teams.

Microsoft bought Yammer in 2012, but it doesn’t feel like it has got loads of attention over that time. It took 4 years before it was added for free for everyone on Office 365. Backend work has been done to integrate it to SharePoint better and features have been added, but if you compare the pace to what we have seen with Microsoft Teams, it doesn’t feel like it’s been a primary focus. More recently Yammer got a new mobile app UI which is nicer.

It seems, no doubt in part due to the pressure from Facebook, Microsoft is now putting more focus on Yammer. Most recently in the lead up to Microsoft Ignite (looking forward to it, I’m speaking if you are there it would be great to say hello), Microsoft is talking about the “Year of Yammer”, where “The Yammer product leadership team unveils the most significant innovations in Yammer history.”

I’m a big fan of Enterprise Social Networks, I hope we see some exciting news from the Yammer team at Microsoft Ignite.